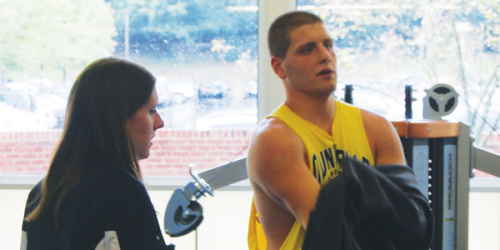 In previous years when Quinnipiac students entered the Fitness Center, an abundance of tank tops, cutoffs, and sports bras were found. But with the new found enforcements of old and updated rules alike, students can expect to see a much different scene at the gym.

Students may have already begun to notice a stricter enforcement of dress attire at the gym. According to new Fitness Coordinator Scott Walker, cutoff shirts and sports bras will no longer be tolerated, citing health as a main concern.

“The main reason is safety,” Walker said in an email. “There are many diseases that are passed through gyms, MRSA and other staff infections, and if we can cut down on the risk of them being spread, we will. A full T-shirt does cut down on skin contact on the machines. Not everyone wipes off the equipment, and, although our staff does clean, we may not catch everything.”

While the rules may seem new to some, most can actually be found right in Quinnipiac’s student handbook. According to page 14 of the handbook, “T-shirts (no sports bras or halters) are required in the Fitness Center.” The rules seem to stress the point to all students as it’s listed under both “Locks/Lockers/Attire” and “Fitness Center Policy and Procedures.” The rule is also made known to students when they sign the Fitness Center waiver, which is required for every student using the gym.

“The T-shirt rule is nothing new,” Walker said. “It has been established but not enforced in the past. We want to cut the risk of students getting sick and that is a simple rule to have. Many other recreation departments around the country and private gyms have the same rule. It does not restrict students from working out. Our athletes during conditioning times wear full T-shirts because they are told to by the trainers, and if they can, our everyday user can wear a full T-shirt.”

Sleeveless shirts, however, are allowed at the track and workout studio, according to Associate Athletic Director of Fitness Tami Reilly.

“I understand when guys have shirts that are literally like a bib because they cut it up so much,” junior Kristina Bacco said. “I have sports shirts that are in the shape of a sports bra on top but they cover my whole torso. It gets really hot in there even when I wear that.”

According to Reilly, 75 to 80 percent of the schools in the National Intramural and Recreational Sports Association hold the same policy. Other gyms off campus, such as LA Fitness, Planet Fitness, and the YMCA, allow sleeveless shirts and sports bras in their gymnasiums.

Even before enforcement of the rule began, supporters of the sleeveless shirts weren’t pleased.

“I usually wear T-shirts to the gym, but there are certain clothes like Nike and stuff like that that have tank tops specifically for working out, so I don’t see why those wouldn’t be acceptable,” sophomore Victoria Trujillo said. “Obviously because they’re made for the gym. I understand that they don’t want people at the gym in booty shorts and belly shirts. That makes other people feel uncomfortable, and that makes sense to me.”

The heat isn’t the only issue gym goers face. Many feel that the sleeves restrict their movements while lifting weights.

“Sometimes with some exercises for your arms, the shirt rides up your arms anyway, so there’s no reason to have the sleeve there,” junior Taylor Jones said. “I’m going to end up rolling my sleeves up, and what are they going to say, ‘You can’t do that?’”

Despite student protests, the T-shirt rule is not going to change.

“It might feel a little uncomfortable, but it’s not that you can’t lift weights with a T-shirt on,” Reilly said. “I mean that happens all the time. People do it all over the world.”