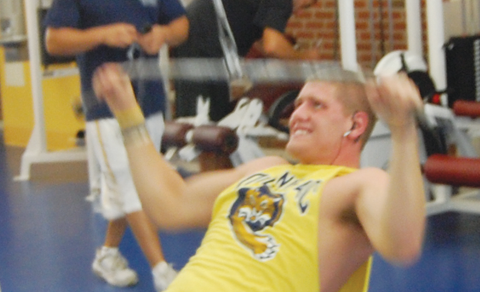 Starting Sept. 6, students were no longer allowed to wear sleeveless shirts and tank tops to the gym. Why did Quinnipiac decide to implement this new rule into the handbook? You’re allowed to wear sleeveless shirts to class but not the gym? Is Quinnipiac headed for uniforms? They don’t care about the little clothing that girls at this school wear to downtown New Haven, which is not the safest place in the world, but they care about what everyone wears to the gym.

I’m sure that the majority of students here were not aware of this new rule until they returned to school for the start of this semester. From past years at Quinnipiac, I have noticed that the gym sometimes becomes very hot and humid. So this year I planned for this by buying clothes specifically for the gym that is usually way too hot, and this includes Under Armour sleeveless shirts, which are designed to be used while working out and playing sports. I spent money on these shirts for a specific reason and can no longer use them for the same reason.

I’m sure I’m not the only one who thought to buy certain clothes that were better fit for the gym and now are not allowed to wear them. If the university really wants to implement this rule it needs to make sure that the gym is kept at a cool enough temperature where students won’t be sweating profusely or sticking to the benches in the gym.

This rule seems even more absurd when you compare it to other similar facilities. Planet Fitness is widely regarded as one of the strictest gyms when it comes to behavior and appearance. It is a self-proclaimed “Judgment Free Zone” and even has a giant “Lunk” alarm in every gym that will go off if anyone grunts, slams weights, or is acting arrogant toward others. Yet even with all these restrictions, they have no restrictions regarding dress code.

What is Quinnipiac really trying to get across with this rule? Are they trying to say that wearing sleeveless shirts is possibly demeaning and intimidating to others? Has Quinnipiac even considered that maybe the type of clothing a person chooses to wear is a comfort issue? As a frequent visitor to the gym over the past four years, I can honestly say that some of the least muscular and fit students will wear sleeveless shirts and some of the most fit and athletic will even wear sweatshirts. It clearly is a matter of what the individual feels most comfortable wearing while working out.

It has been mentioned that with the ban of sleeveless shirts it will reduce the amount of skin contact area available to transmit diseases such as methicillin-resistant Staphylococcus aureus. While this argument is valid, it would be greatly appreciated for Quinnipiac to show evidence that such diseases are being transmitted through the gym. Where is the proof that there was an increase in MRSA here at Quinnipiac? There are only a few select machines in the gym that would elevate the risk of such transmittable diseases with only the arms being exposed.

Most of the equipment in the gym is exposed to mainly back and chest areas which are usually covered by shirts. Think about this practically: A sleeveless shirt would only increase the contact surface area of the skin by about six inches – is that really enough to alarm Quinnipiac’s gym staff of the possibility of transmitting a disease?

Why don’t they ban shorts then? Your legs come in contact with nearly as many machines as your arms do. Did they forget that your hands touch everything? If they are so worried about transmitting diseases then I guess we will have to wear full body suits to the gym.

All we are asking is that Quinnipiac takes a realistic look and approach to this matter. Is this ban really worth all the trouble that it is causing? If you take a walk around the gym you will hear the majority of people talk about how irritated people are with this rule change, almost to the point of disbelief. If there is proof that there was a large increase in the diseases they are trying to protect us from then that’s fair. But if not, just restore things to the way they were because I can foresee this becoming a larger issue then it is now.