Dayglow or bust: pre-glow to Dayglow 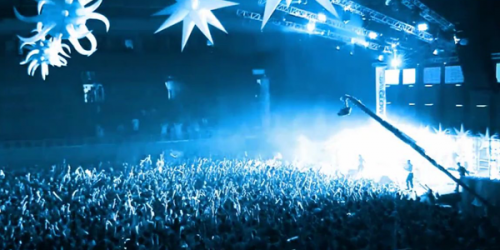 If you notice a swarm of Quinnipiac students wearing white this Friday and Saturday, don’t be alarmed. No, they won’t be attending P. Diddy’s famous “White Party,” but they will be traveling to Hartford’s XL Center to attend Dayglow, “the world’s largest paint party.”

Tickets for the Hartford show went on sale July 25 and 27 for the respective weekend event days. But those coveted tickets didn’t stay on sale very long.

“[Dayglow] will just turn into a spectacular event,” Sheldon said. “We go after as many popular events as we can here, and this is just another one of the great events. It should be one of the busiest falls at the XL Center in recent memory.”

In terms of safety and security, concert goers can expect standard scans and pat-downs upon entry to the arena. In addition, no bags, food or drinks will be permitted into the concert. Cameras and cell phones, however, will be allowed.

Outside paint products will also be prohibited from the event. Dayglow will use certified washable, non-toxic neon paint that patrons will receive during the shows.
[quote]
According to Sheldon, the XL Center will be adequately staffed both nights of the concert to ensure patron safety. Medical teams, security, and members from local fire and police departments will all be in attendance.

“I think we should be pretty ramped up in terms of safety,” Sheldon said. “We encourage everyone to enjoy the show, but to please do so in a respectful and responsible manner.”

The event that started in 2006 on Florida college campuses has since grown into an international concert tour. Florida promotional network Committee Entertainment spearheads Dayglow, which features high-energy deejays, dancing, glowing paint and circus-like acts including contortionists, fire performers and acrobats.

Throughout September and October, the Dayglow 2011 tour will travel to cities around the country including Albany, Tampa, Philadelphia, St. Louis, Nashville, and of course, Hartford.

For many Quinnipiac students, another safety concern involves the commute from Hamden to Hartford. The XL Center will not provide any transportation to or from the concerts.

Senior Dan Scott is driving to Hartford with several friends and staying the night at a nearby hotel. Scott said he has high expectations for the upcoming concert.

“When I heard about Dayglow coming to Hartford and saw what the shows were like, I felt that it was something I should experience at least once in my life,” Scott said.

Junior Lauren Ferrara said she is excited to attend Dayglow to bond with her sorority sisters. She will travel to Hartford on a party bus with friends on Friday afternoon.

“I just think it’s going to be really, really fun. The whole paint thing just excites me,” Ferrara said. “I’m excited for the crowd of people and just the whole atmosphere.”

Unlike upperclassmen, freshmen are not permitted to have vehicles on campus. Freshman Amanda Smyth plans to take the Quinnipiac shuttle to Union Train Station in New Haven and then travel to Hartford.

“All of a sudden it’s huge,” Smyth said. “I heard about it previously from other people and friends who went, and they said it was the best time ever. I’m most excited to see what it’s like with all of the paint.”

“To be honest, I think this whole [electronic dance] genre of music is an untapped market,” Sheldon said. “The XL Center works hard to bring unique and innovative events to Connecticut, and we are thrilled with how well Dayglow was received, especially among the college demographic.”