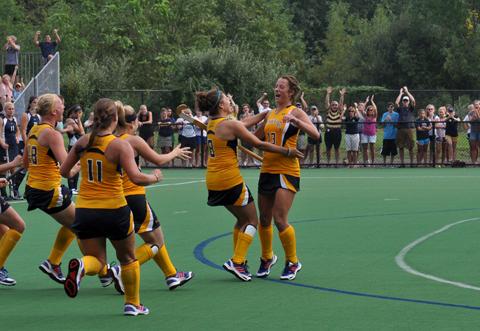 With a 2-2 tie at the end regulation, the Quinnipiac field hockey team held off the Yale University Bulldogs in two thrilling 15-minute overtimes and a penalty shoot out in a non-conference game on Sunday. Kaitlyn Notarianni scored the winning goal in the penalty stroke shootout.

“I was fortunate to be the last person to go because I was able to see where the goalie was going,” Notarianni said. Although her goal does not count toward her record, Notarianni has scored in all three games this season.

For first time since 2006, the Bobcats (2-1) have defeated the Bulldogs (0-2). “This was like our biggest game of the year,” Notarianni said. “Even though it is non-conference, this game is always a bloodbath for some reason. It is always the biggest adrenaline rush.”

The friendly spirited rival led to seven cards issued throughout the game and both overtimes. Yale received three green warning cards and two yellow cards, each leading to a five minute game suspension.

Nicole Lewis, Quinnipiac’s goalkeeper, had a career-high 19 saves, 10 of them coming in the two overtimes. Lewis and the defense stopped many of the late-game Yale breakaways.

“She was on fire,” Quinnipiac head coach Becca Kohli said. “When you see an athlete in the zone like that, more often than not you’re going to come out with a win, especially if its your goalkeeper.”

The Quinnipiac defense did not allow any goals after halftime.

“I can honestly thank my team. My defense did so much in front of me to make easy saves and block easy shots,” Lewis said. “During strokes I try to focus on the ball not the player, I just do my thing.”

Notarianni found Cunniff, who scored off of a corner early, in the second half to tie the game at 2 and eventually sent the game into overtime.

Freshman Danielle Allan scored 15 minutes into the first half to put the Bobcats on the board, 1-0. Allan leads Quinnipiac in goals for the season with three.

Yale’s Erin Carter and Mia Rosati scored for the Bulldogs.

Quinnipiac will travel on Friday to Hamilton New York to face Colgate at 7 p.m. and will travel Sunday to State College Pennsylvania to face off against Penn State University.