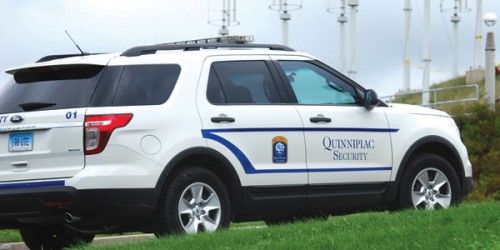 As Quinnipiac students moved into their new homes for the next year, some may have been surprised by glimpses of shiny, new security vehicles patrolling the campuses. Over the summer, the security department acquired three 2011 Ford Explorers to replace the older models.

The university used money from its capital budget, which is set aside for the university to use on major projects and purchases, such as new personnel vehicles.

“The mileage just continually grew on the [older] vehicles,” Chief of Security & Safety David Barger said. “Of course, with the mileage and the type of vehicle we were using, maintenance costs were really outweighing the value of the vehicles.”

The new security vehicles are base models, according to Barger. While it does come with the ability to control the radio from the steering wheel, devices such as GPSs aren’t included. To help keep the engine cooler and cause less damage, a trailer-towing package, which gives the vehicles a larger transmission cooler and a larger radiator, was added.

[quote]
In addition to the three new 2011 Ford Explorers, security uses one of its older vehicles at North Haven and keeps a Jeep Grand Cherokee as a spare vehicle in case of emergencies.

“In the big picture, I look at it as we’ll have the ability to service the campus community even better,” Barger said. “We don’t have to worry about a vehicle breaking down.”

Barger dismissed thoughts of using police cruisers or hybrid vehicles when he realized the real problem for the security vehicles was York Hill.

“We needed a vehicle that could surmount that hill with the least amount of strain on the engine,” Barger said. “We found ourselves needing a SUV because of the amount of equipment we have to carry and because we need the ability to have four-wheel drive all the time.”

With the growth of the university to three campuses — Mount Carmel, York Hill and North Haven — and off-campus housing, security found its vehicles facing the wear of the acquired mileage and weather conditions. As opposed to its 2005 to 2008 model ancestors, which had V8 engines, the 2011 model is more fuel-efficient, has a V6 turbo engine and emits less greenhouse gases.

“We don’t use the vehicles just to patrol,” Barger said. “We use them to transport students, transport signs, transport different types of equipment, so we need the room, we need the four-wheel drive capability, and it didn’t appear through our studies and [other college studies] that it probably wouldn’t save us any money in the long run if we had gotten a four-cylinder; we may have been doing engine work on it.”

In addition to the greener features, the vehicles are decorated with new university decals that will make security more visible on the three campuses, Barger said.

“I would hope that the community would see them and take pride in the fact that we do have these new vehicles,” Barger said. “They’re clearly marked for students to pick us out at a distance on campus. I’m not quite sure if they were able to before. We have all reflective markings on them, which is quite different from what we’ve had in the past so it makes it safer for the officers driving the vehicle because they do have reflective markings.”

Not everyone on campus agrees that the new Explorers were a necessary purchase. Many do not see what was wrong with the older ones.

Senior Ugur Temel also feels that the older models didn’t show the wear of the mileage and the 2011 models aren’t essential to the university.

“The other cars seemed like they were in good shape, so I guess it was a useless investment that the university thought was good in the long run,” Temel said. “They charge us enough to buy new cars, so why not?”

Barger attributes the negative feedback to the students’ lack of understanding on the amount of patrolling that is done in a 24-hour period.