It didn’t matter which big names highlighted the South Bronx’s summer city basketball circuit at Gauchos Gym on Saturday. James Feldeine made sure he put on his own show.

“Great game at dyckman thanks for all the love,” Feldeine tweeted after the game. 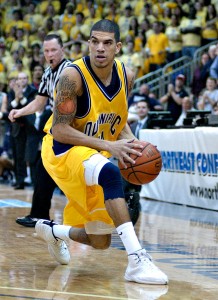 But the 6-foot-4 Feldeine was the one who put on the real show. Quinnipiac assistant coach Eric Eaton, who coached Feldeine when he was a Bobcat, expressed high praise for Feldeine via Twitter.

Feldeine made the triple-double in his senior year look miniscule with 50.

Feldeine averaged 16.8 points per game his final two years at Quinnipiac and helped the team emerge as a Northeast Conference contender.

After he graduated in 2010, he pursued playing professionally overseas in Spain. Playing for Leche Rio Breogan Lugo, he played 41 games and led his team in scoring with 15.2 points per game.

Feldeine scored 30 points in a Spanish league game when he went 10-for-17 from the field.

Jennings, the youngest player to score 50 points in an NBA game, had already played six games before he tallied 55 against the Golden State Warriors, who finished among the worst teams in the Western Conference in 2010.