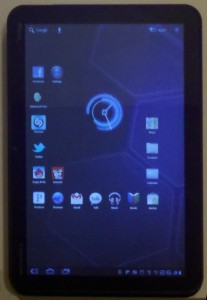 For the last month of the spring semester, I had the opportunity to test out the Motorola XOOM, Google’s tablet competitor to Apple’s iPad 2.

Full disclosure: Before I received the XOOM in the mail, I didn’t see how a tablet would fit into my work flow. When I’m in my dorm, in class or doing work elsewhere, I’m on my laptop. When I’m on the go, I’m on my smartphone. There’s no in-between for me.

After seizing my free opportunity to test out a tablet, my work flow hasn’t changed, but I recognized how tablets could make a good fit for others.

Michael Murphy, a spokesperson for Verizon Wireless, cited QuickOffice and Google Docs as word processing applications that make XOOM a device for presenting and producing content, the latter being a key component for college students to consider.

“The XOOM is a versatile device that allows college students access to the Internet, documents and class notes, but also provides a high-def display to watch movies and play games on the go,” Murphy said. “It is a great all-in-one device for students looking for an alternative to a laptop.”

The key reason the XOOM (or any tablet) doesn’t fit into my work flow is its keyboard. Its size prevents me from typing at full speed, and if I were to go out and buy an external keyboard, or even a virtual keyboard, I’d be defeating the purpose of a tablet: portability. I’d prefer to use my laptop.

But once I finished all the work I have to do and had some leisure time, I had a hard time putting down the XOOM.

With that being said, I now will proceed with a complete review of the XOOM, and provide some info on its competitors. 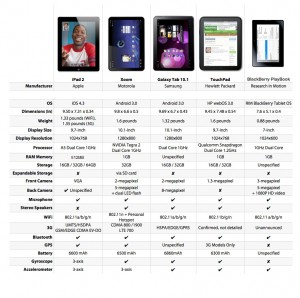 To the right is a complete chart of the specs between the five major tablets on the market with the iPad 2 and XOOM leading the pack. XOOM is clearly meant to be used landscape style, as it is slightly wider and much shorter than the iPad 2. The iPad 2’s main use is portrait style. The location of the front camera on both devices distinguishes the two viewing styles, but both devices run smoothly either way.

The amount of RAM and weight are a couple of notable differences between the iPad 2 and XOOM. The XOOM has twice as much RAM as the iPad 2, but is about a quarter of a pound heavier.

Multimedia
Multimedia consumption generally is a plus for all tablets, and the XOOM is no different. Its display is phenomenal, the fact that you are holding it and can literally flip through photos still fascinates first-time users, and its portability makes it great for viewing anywhere.

Google revamped its music application interface, giving it a similar user experience to Apple’s. Now the XOOM app is attractive but still very intuitive, which are two attributes that make the iPad 2 a top seller. I would still give the edge to iPad 2 in this department only because it is so easy to synchronize with iTunes, which is more widely used and far superior to Windows Media Player.

Browser
Web browsing wasn’t as instant as it seemed on the commercials, but it wasn’t slow by any means on a good wireless and 3G connection. One thing I was shocked to discover was that the XOOM didn’t come ready supporting Flash, which is a clear advantage over Apple’s products. Once I manually installed Flash so my browser could display Flash elements, everything changed. According to some developers, HTML5 could replace Flash, but these conversations have been going on for more than a year and it doesn’t look like major changes will happen anytime soon. If it does, Apple products will be ready to support it and match Android’s Web functionality.

User Interface
The XOOM has a ton of customization options, but the interface as a whole is not nearly as intuitive as the iPad 2. Starting with the location of the power button (on the back of the device next to the camera), to the unclear buttons along the bottom and top edges of the interface, it evokes a nerdy feel. The iPad 2’s interface is so simplistic that I’m confident even people who repel technology could operate it without any questions. I happen to prefer the XOOM’s advanced look because I enjoy figuring out what every button does and learning the best ways to operate the device. In fact, I think its advanced look and customization gives it an edge over the iPad 2. But if you are looking for ease of use, I would suggest trying the iPad 2.